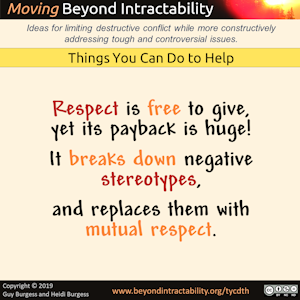 The above image is free to copy and use for non-commercial activities according to the Creative Commons License CC BY-NC-ND 4.0, which asks that you do not alter it or remove the attribution information.

When I taught an undergraduate conflict skills class, I told the students that they really only needed to remember two words from the entire semester.  Those words were: "listen" and "respect!"  And since listening carefully and attentively to the other is part of giving respect, you can argue that there is only one word they needed to remember! It's a good lesson for everyone, not just students in my class.

Although there are no "silver bullets' in intractable conflicts, giving respect can be hugely powerful. Sometimes it is ALL that people want.  If they are given respect, that means they are listened to, and they are treated fairly.  Once that is done, often, everything else can be worked out from there.

More details can be found in the following articles:  A BI essay on Humiliation which explains WHY respect is so important, a Things YOU Can Do To Help post, and  finally, a BI Knowledge Base Essay on Respect.

Knowledge Base Essay--Humiliation
While commonly used, humiliation is extremely destructive--to its victims, and also, often, to the person or group doing the humiliation as well. Respect is the opposite.

Things YOU Can Do to Help--Treat EVERYONE With Respect
This action is difficult to contemplate--and do--at times, but the payoffs almost always make it worth the effort.

Knowledge Base Essay -- Respect
Treating people with respect is key to conflict transformation. When denied respect, people tend to react negatively, often getting angry and lashing back.

All Infographics - A set of very short statements that try to emphasize key conflict resolution principles, which, if followed, would make a lot of intractable conflicts much better.

Infographic Text
Respect is free to give,
yet its payback is huge!
It breaks down negative stereotypes,
and replaces them with
mutual respect.

Copyright © 2016-22 by Article Authors
All other content
Copyright © 2016-22 Guy Burgess and Heidi Burgess
All rights reserved. Content may not be reproduced without prior written permission.
All Creative Commons (CC) Graphics used on this site are covered by the applicable license (which is cited) and any associated "share alike" provisions.